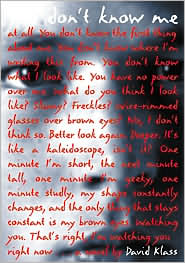 Confession: I read this months ago. According to my log, I finished it on 23rd August. I've read twenty more books since this one and completely failed to blog about any of them. This is therefore a mammoth blogging session in which I shall attempt to make my blog look pretty and organised again, filling it with pithy witty reviews of books I can only a little bit remember in some cases.

You Don't Know Me has been knocking around the book cupboard for ages. We have thirty five copies of this book in near pristine condition and nobody teaches it. I expected it to therefore be rubbish and to have to sigh heavily and re-juggle the curriculum.

People are crazy. This is so up my street it's unbelievable. American high school, angsty, dysfunctional families - this is basically my ideal kind of read. And I was going to ignore it?

In basic terms, this book is about a boy called John who believes his mother doesn't understand or know him at all. He lives his life basically feeling pretty invisible, apart from when the man who is not his father hits him. Gradually he finds out who his real friends are and that not all teachers are useless hopeless blind idiots - which I'd hope my students found as well.

Admittedly, the narrative style is a bit annoying at first as Klass tries a little too hard in my opinion. Once the story proper gets under way (as opposed to mere scene setting) it becomes a much more interesting book. This is why I've opted to teach it starting next week. That, and I cannot do The Boy in the Striped Pyjamas again.